Counterbalance forklift trucks are arguably the most commonly used types of forklift in warehousing applications. Their appearance is synonymous with forklifts, with typically 2 or 3 axles and front-facing forks.

Counterbalance forklifts are versatile machines which have front-facing forks and a rear-steering axle; making them highly manoeuvrable. They have a rigid mast on the front of the machine from which the forks extend.

The middle nineteenth century through the early 20th century saw the development that led to today’s modern industrial forklift trucks. The forerunners of the modern forklift were manually powered hoists that were used to lift loads.

Continuing development was encouraged by expanded use of the industrial forklift truck and continued through the 1920s and 1930s. This led to the development of the first hydraulic power electric power forklift trucks. Following the war, more efficient methods for storing products in warehouses were being implemented, such as narrow aisle forklifts and reach forklift trucks.

On completion of a counterbalance forklift training course; candidates will be able to:

Forklift training can be completed in line with a number of accreditations.

We can offer RTITB NORS training which will entitle the candidate to certificates and ID cards that bear the RTITB logo. Additionally, we can offer counterbalance forklift training under CPCS and NPORS where required. 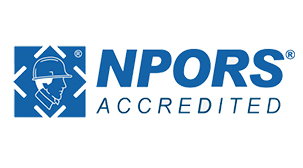